skip to main | skip to sidebar

I despise technology!! I like it but we have a love/hate relationship! i just spent about 30 minutes writing a new post and then poof, gone. I was commenting on how I see there's a link to this blog on fb and how I clicked on it out of curiousity. The last post was 2010!! Wow! another thing started and then forgotten because of time. But I also loved looking back on sweet memories!! So, with this in mind, I'm going to try to catch up and post some more. If for no one else but me!! So- here we go again to try to document a snippet of the Sims! 🤗
Posted by Kelly at 1:10 PM No comments:

The Sims eat at Michie Tavern 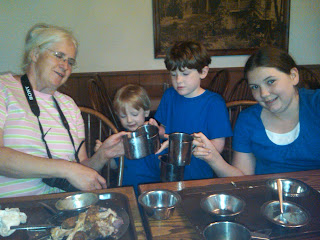 They clanged a toast to our trip!

Sent from my Verizon Wireless BlackBerry

I love this time of year! My things to do from the school year is winding down...our school year with CC is over, we are finishing up with our school at home (finishing with our big trip to VA and PA), girl scouts is over, but also I am looking ahead to what the summer has in store...Synod and Bonclarken, birthdays, beach, pool, seeing the CO crew, catching up on craft projects I don't have time for the other times of the year!

Here is a basic "run-down" and "things to come" list from the Sims...
>S is now potty-training! yay! For so long, he just didn't care! But thanks to the help of the Easley crew, he is getting it!! (see previous post...ha!)

>Izz loves homeschooling and CC! She recieved the Memory Master Award from school last month, which means that she memorized all her facts this year and could recite any of it back to the 3 people that quizzed her! This, in my opinion, is quite an accomplishment! She has an incredible memory! Some of the things she had to memorize was 160 timeline happenings (starting with creation all the way to modern wars and space race), all the presidents, 24 weeks of science and history facts, latin noun declension endings, 24 geography places in Africa, Americas,and the Middle East, and Math terms and facts. WOW!

>P is learning to read, but that is slow coming too. He would rather solve math facts and problems, put together puzzles, or play with army stuff or legos!

>MyMy- "Ms Independent"! She has a sweet heart and a love for her brothers and sister, but has an opinion and is NOT scared to tell it! ha!

>K is finishing school!!! I want to scream from the rooftops! He started this 7 years and 3 kids ago!! So now, after Saturday's graduation from Erskine, he will be the Rev. Dr. Sims! Not that this will be a pay increase, or some great title, but he learned alot from his classes that he uses in his ministry. And the fact that he stuck with it and finished! I am so proud of him!

>my whiole family (Mom and Dad, Aunt Louise and Claudia, all 6 of us, lauren, and Bryan) was able to get together and spend a great Sunday! Bryan was on this side of the country for a wedding, so everybody came to see us here for church and then just sat around, laughed, talked, and ate! We also got to go see my sister's new house! Oh, (even though this won't make sence to anybody else, but my siblings) we got to experience the rescue squad and show alittle happy!!! HA!

>CC is over, but we signed up again for next year (they asked me to be a tutor again)! So I am already looking ahead to next year and what we will be presenting. I love teaching!

Hope everyone has a great start to their summer! Stay cool!
Posted by Kelly at 12:11 PM No comments:

(disclaimer: sorry in advance for the "potty" humor, but this is just too funny not to get down in the archives)

This is what was overheard today as I walked in the bathroom and see MJ and S standing arm in arm looking down at the potty
S:mymy, see all my poopie? I did all that!
MJ (to the best of my translation said something to the effect of): that is really good!

Let me start this post by saying..I hate/detest/STRONGLY dislike being sick to my stomach!!! I would rather have most other things than throw up!
*Also I am sorry for the topic of this post, but it has been what we are dealing with for the past 4 days!

Walking around my house yesterday, the main image that came to mind was one of a sick ward! Cots, blankets, and sheets spread out and covering every bit of furniture like a medical tent thrown hurriedly up. The smell of Lysol floating in the air. Cups of sprite and 7up beside each person, and Saltine crackers and Chicken noodle soup waiting on the counters for our stomachs to stop churning. Which, as an aside, is probably why I dislike chicken soup and Sprite to this day, when I taste them I am immediately transported to a memory of being sick!

This nasty bug hit us quickly, wiping out 5 out of the 6 of us in 48 hours! Thankfully, it left just as quick as it came. Even though I was exhausted while I was trying to take care of MJ with only 3 hours of sleep and throwing up for the 5 hours before that, I am now glad that it did hit quick. I hate that dreaded feeling of waiting and wondering...will it hit?, who will it hit next? Am I in for it? It is like sitting there watching to see if their heads will start spinning! :/

But now my best friends (and I use the term "friend" loosely) have been my washing machine, Lysol, and CaviWipes! But the motivation has been good! Life goes on, sickness happens, but I would rather avoid it at all costs!
Posted by Kelly at 10:11 PM No comments:

"Mom, you are so cool!" (from P all because I got a hair clip out that was stuck in the hand vac he was using). yes, it takes so little to impress them at this age! :)

"This house so fun!" (S says as he leaves his bubble bath)

"I no sick anymore, I have bubble bath" (again by S. And as you can see he LOVES his bubble bath and evidently thinks it now has magical, healing powers too) ha!

Kyle came down and asked the 3 older kids, "Have you all eaten anything for lunch? Do you feel like eating?" while MJ and I were sleeping off our sickness. I started to stir because I was interested in how they were doing. To which they excitedly responded, "oh, yes! We found the pudding in the frig!" oh yuck, I thought rolling over!
Both of the last 2 comments came from our past weekend-see post above.
Posted by Kelly at 10:06 PM No comments:

My eldest son has such a huge heart!! Now don't get me wrong, he can also be a huge booger, but I truly believe that comes wrapped up with his emotional side...he is empathic and caring, but he also has a temper...all part of the package. I have started calling them P.isms...

"Mom, I need my hug and kiss...I always sleep so much better with those!"
"Are you ok? Do you want to talk about it?"

I love noticing the difference between boys and girls! Everything with my boys seems to turn into a gun or ball! It was never like that with Iz. Everything was a phone or a baby that needed her "tending to". It is funny that I already see that in My...that need to mother something! But at the same time, it is funny to watch her grow up with 2 older brothers. Twice in the past month, I have turned around to see her "shoot". The first time, I really couldn't have been sure of what I saw because she was holding a banana (it looked like it, but it also looked like she could have been talking into it). But today, there was no doubt! She came down the hall after the boys holding/pointing their cowboy gun!! I was laughing so hard and wishing for a camera! Gives new meaning to her nickname pistol! ha! Watch out world...here she comes! :)
Posted by Kelly at 11:33 PM No comments: 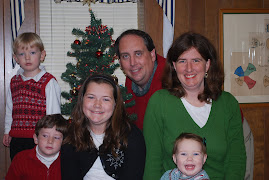 Keeping up with friends and family...